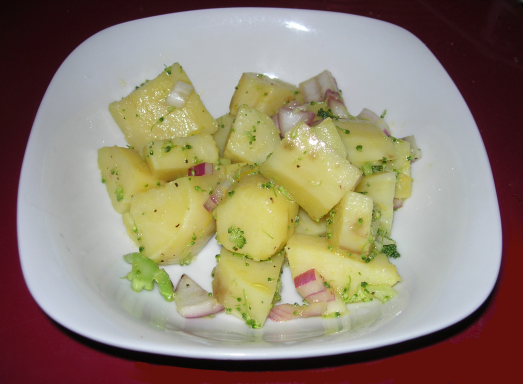 So, I had a hankering for potato salad last month, but had no potatoes. No problem, I decided to use yams instead. But then, I had no celery and no pickles either. I did have broccoli, so I thought why not? Well, it turned out so delicious I made it again, even buying broccoli for the purpose of making the salad. So here it is.

Peel and cube 4 medium yams. Makes about 6 cups of yams. Add to salted boiling water and cook for about 10 to 15 minutes, so they are fork tender. Rinse in cool water so they stop cooking. Drain and refrigerate until completely cooled.

Peel the stem of a broccoli top. Chop the stem and florets into small pieces.

Mix together and dress with your preferred dressing.

My dressing is a light lemony one with a hint of mustard.

I zested one lemon into the salad.

In a bowl, I mixed the juice of one lemon (2 TBSP) with 2 TBSP of apple cider vinegar and 2 TBSP of olive oil. I then added 1 tsp of mustard, salt, and pepper and mixed together. Then I tossed it with the salad. This makes about 8 cups of salad.

It’s very light and fresh in flavor, allowing the yams to be the star. 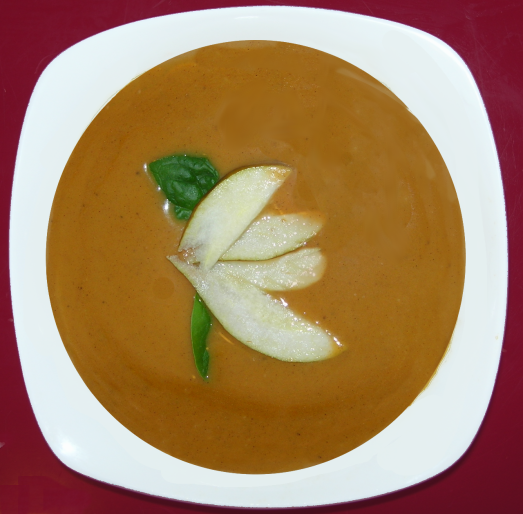 Put 3 TBSP of olive oil in the bottom of a large stock pot on a medium low burner. Add 1 TBSP of cinnamon, 1 tsp of allspice, salt, pepper and heat until the aroma rises. Add 2 TBSP of chopped ginger, and I know that is a lot, but ginger is what we need to make this a savory soup, not a dessert soup. Ginger and onions, which come next. Add 1 yellow onion, chopped coarsely. It’s all going to be pureed in the end, so don’t bother chopping fine. Sauté until onions are soft and transparent.

Peel 8 small yams and cut into uniformly sized chunks, about 2 inches square. Toss into the pot with 32 oz. of vegetable broth. Bring to a boil, then reduce to simmer. Cook until tender, about 20 – 30 minutes depending on the size of your chunks. Test with a fork.

Peel 4 pears, remove the stem, and chop into pieces and add to the pot. Cook for 15 more minutes. Add 32 oz. of unsweetened coconut beverage. Let cool and puree using a Magic Bullet, blender, or immersion blender.

I used 5 slices of fresh pear (one sunk) and a couple baby spinach leaves to garnish. I was going for the artistically pleasing Rule of Five, but one did not cooperate. I suppose if I were a super arty food blogger, I would make another bowl, but that seems silly for this blog.

This makes a smooth soup that is about the consistency of a canned tomato soup, but the similarities end there. It is so good, it is not the least bit sweet, but tastes of yam and pear and these deep aromatic spices with a little bit of heat that lingers from the ginger. It is not the least bit sweet despite the pears. The ginger and allspice are important in grounding the flavor on the savory side. If you don’t have allspice, you could use nutmeg or cardamom. It’s also kind of addictive and from spoon-licking from when I served it up to reheat, I can tell you, it’s actually pretty good cold, too. It was tasty last night, but today’s its flavor is richer. This is no single-serving. It makes 4 quarts of soup, which was nice to send some home with friends and to save for lunches this week.

The unsweetened coconut beverage is in a white unlabelled box with the ingredients stamped on it for Oregon Food Bank. This product from Pacific Foods matches the ingredients in type and order of quantity.

Everything but the olive oil and spices came from the Oregon Food Bank’s Harvest Share program. Harvest Share is a program that provides fresh produce to low-income Portlanders through the Oregon Food Bank. This is a big contrast with regular food bank products which are dependent on donations and tend to focus on nonperishable carbs like rice, pasta, beans, bread, and crackers. It’s a fabulous program that I wish were available across the country because fresh produce is expensive and many food banks simply do not get enough donated, and what is donated is often well past its prime.

Winco had roast pork for $1.66 per pound, so it seemed like a good time for pork roast. While trying to decide what to serve with it, I came across a recipe for Earl Grey-Crusted Pork Loin with Fennel and Apples. I didn’t have a pork tenderloin and wanted to use some dried cherries, not fresh apples. I like raw apples better than roasted ones, but I thought the recipe gave me something to work with.

I preheated the oven to 450°. I cut one small yellow onion in slices and lined the bottom of my paella pan which doubles as a roaster for me. I cut the tops off four Earl Grey tea bags and poured them out onto my cutting board. I added 1 tsp of salt and a tsp of pepper and mixed them together and then I rolled my pork roast in it. It was a three pound roast and was completely coated by the tea, salt and pepper blend. I have never seen anything stick so completely or so well as this tea, it was much easier than doing a pepper coating.

I stuck the roast in the oven and let it cook at 450 for 20 minutes. Meanwhile, I peeled and cut 1 yam, 1 turnip and 2 red potatoes into chunks about 1 inch square or so.

Now it was time to take the roast out and add the vegetables. I added  1 TBSP of olive oil to a small bowl, added some salt and pepper and 2 cloves of chopped garlic. Then a handful at a time, I tossed the root vegetables in the oil to coat them and then spooned them into the pan around the roast. I added a handful of dried cherries at the end, putting them into the oil, salt and pepper first as well.

I put the roast back in the oven at 350° for 40 minutes. I checked the temp and it was 140° which is what I wanted. I removed the roast to rest for 15 minutes and put the veggies back in to finish cooking. I turned it up to broil for the last 5 minutes just to get a nice dark brown crispiness on a few of them.

The vegetables were magnificent as roast vegetables always are. The juice from the onions and the pork blended with the dried cherries for a delicious liquid that the vegetables drank up. The real revelation, though, was the pork. The Earl Grey’s sweet and tart bergamot flavor permeated the meat, but with delicacy so it was not overwhelming at all. it was extraordinary, so delicious and so fragrant. I will definitely make this again. After all, it turned a $1.66 per pound cheap roast into something fit for fine dining.

You will get several meals from this prep, but you can roast them one meal at a time and store the prepped veggies in a container in your fridge. The trick is to cut everything pretty close to the same size.  For this batch I peeled and cut to 3/4 inch cubes the following vegetables. Not all are root vegetables, but they work well with the root vegetables. I would have included carrots, but served carrot soup with this meal and did not want to add more carrots to the meal.

Generally the goal was to get about equal portions of each vegetable. I then took a whole garlic and peeled and separated all the clover and tossed them in as well. I sprinkle with about 2 TBSP of kosher salt more or less and 2-3 TBSP of olive oil and a spring of rosemary, removing all the leaves and chopping into 1/4 long pieces. With my hands, I mixed all the salt, oil and rosemary into the veggies to make sure they were completely covered. I put in a plastic storage bowl and let marinate overnight. I laid a few servings down as the bed for my roast and let cook at 300° while the roast cooked. After removing the roast, I increased the oven to 450° and let cook until the vegetables began to caramelize.

This makes about 12 servings of vegetables, so I only roast one serving at a time. To roast them without the meat, just spread in a pan and roast at 450° for about 20 minutes. You can also boil and mash for a lush puree.

I wish I could get my cat with a head cold to eat these Jamaica Jerk Yams. It would clear his head right out. This is a very easy meal to make and takes less than 20 minutes from start to finish.

Start with the yams. Turn oven to 450°. Take one yam and peel it. Slice it into 1/8 inch chips. In a baggie, put 1 TBSP of peanut or vegetable oil. Put the chips in the bag and shake it. In another baggie, put a couple tablespoons of Jamaica Jerk seasoning blend. Toss the chips in there and shake.  Lay out on a cookie sheet so they don’t overlap. The oven should be hot enough now to put them in to cook.

Now, slice off some pork from that roast from last night and toss in a nonstick saute pan with 2 TBSP of barbecue sauce. Reheat on medium low, stirring occasionally.

Now, Put about 3 TBSP or so of plain yogurt in a bowl and add curry powder to suit your taste. Start with 1/2 tsp and stir and taste test. Add another 1/4 tsp and so on. You could make up one small package of plain yogurt and store it. It keeps well and is good on cold macaroni in a salad.

Clean and cut up 2 leaves of romaine, cut 5 olives in half and toss on top with a bit of Greek Feta dressing. Put the BBQ pork on the plate, add the curry yogurt and pull the hot and done sweet potatoes out of the oven. Serve while nice and hot.