Pickled vegetable salad is found in cuisines around the globe. I made the giardiniera from The Grand Central Market Cookbook the other day so it had a few days to marinate in brine for Thanksgiving. I decided to make a second salad to evangelize my love of anise with vegetables.  Believe me, anise seed does not make your food taste like licorice.

To make this, I made the brine first because it must be cooled down before you add it to the veggies. I heated a saucepan over medium heat. I added anise seed and let it bloom a bit, heating it in the dry pan until the aroma scented the room. Then I added apple cider vinegar, a whole serrano chile with the stem removed, salt, and sugar. Heat this until the sugar dissolves, Remove from the heat and cool.

Chop the vegetables, add the brine. Let marinate for at least 12 hours. This is a crispy, crunchy salad with a bright flavor. This is my second pickled salad for Thanksgiving dinner and serves 8. 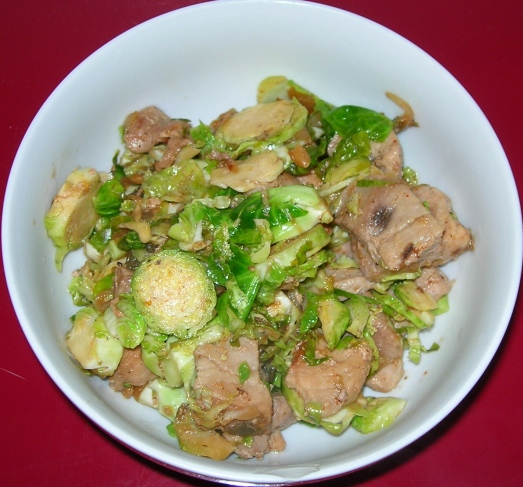 I know pork and cabbage are great companions, so it made sense to me that Brussels sprouts would love pork, too. To make this, I first chopped up 1/4 cup of yellow onion and minced about 1/2 inch of fresh ginger. I heated 1 tbsp of olive oil in a non-stick skillet and sautéed the onions and ginger until tender. I added 2 of the pickled Serrano chilies I had made, diced up to add some heat along with some salt and pepper. Meanwhile, I took a 6 oz boneless pork loin chop and cut it into bite size pieces and added that to the onions and sautéed.

While the pork cooked, I cleaned and sliced up 2 cups of fresh brussels sprouts. When the pork was a few minutes shy of done, I added 2 tsp of soy sauce and a generous squirt of Sriracha, stirred and then added the brussels sprouts and some salt and pepper. I put a lid on it so that the steam would help cook the veggies quickly. After a couple minutes, I lifted the lid, stirred some more and then let cook until done.  I cooked until the brussels sprouts were tender, but still toothsome and not the least mushy.

There was plenty of heat and the blend of ginger, chilies, Sriracha and soy gave this a distinctive SE Asian flavor – with multi-layered spicy heat that was not overpowering. The brussels sprouts absorbed the rich flavors while still remaining fresh and earthy. It was simply delicious and very easy to make. 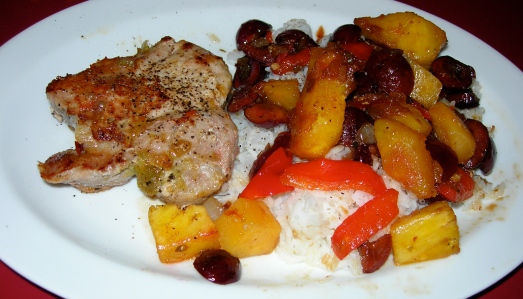 This is significantly tastier than dragon’s breath, but it will add a touch of fire to your day. I was hankering for some sweet and sour pork, but I also had some parboiled rutabaga left over from salad fixings and some pitted cherries left from a chutney I had made and it occurred to me that they could work in a sweet and sour pork. They would add compatible flavors, at least. However, there was nothing at least about this dish. It was by far the most delicious sweet and sour pork I have ever made.

So, to start it off. I chopped half an onion and minced an inch of ginger and 1 serrano chile. I sautéed them in olive oil on a medium low heat with some salt and pepper. Meanwhile I chopped up 1/2 a red pepper. I had cleaned and cut up the pineapple yesterday, so it was in a container in the fridge. I parboiled rutabagas for salad 2 days ago and they were also in the fridge in a container. I added a pork loin chop (about 6 ounces) and let it cook with the onions, ginger and chile and added some salt and pepper. When it was browned on one side, I added the red pepper. I let cook for about 5 minutes and added 1/4 cup cherries and 1/4 cup of pineapple chunks and 1/4 cup of rutabaga and season with salt and pepper. I let them cook until warm. Then I added 2 tsp of soy sauce and 1 tbsp of white vinegar and stirred. Added salt and pepper to taste.

Please note that when you add salt and pepper at ever step of cooking, you are adding much less at one time. Seasoning step by step means you will avoid over or under seasoning.

I served over plain rice. This had all that sweet and sour pungency of the traditional dish, but the rutabaga and cherries added an earthiness and umami that made it simply out of this world. Frankly, it would taste delicious without the pork for a vegetarian entree.

I mixed the following ingredients together and put them in an airtight storage container. I let the salsa rest for a few hours, allowing the lime juice, onions and chile flavors to soak into the cherries. This made a quart of fresh salsa. Since it is fresh, not cooked, it will need to be consumed relatively quickly, though all the acid will slow spoilage.

I served it with a turkey burger for supper and with a bagel for breakfast. I think it would be delicious on grilled chicken breast or pork chops, added to a burrito or on top of a salad.