One of the things I brought home from the Food Bank is a package of great sandwich rolls. They were a bit old, so I lightly toasted them to freshen, just laying them unbuttered on a cast iron griddle to toast lightly.

Meanwhile, I sliced about a half cup of cabbage and mixed it in a bowl with the Roasted Grape Vinaigrette I made last night. I chopped up the top of one fennel frond and mixed it in

After the bread was toasted, I spread some mayo on both halves. On one side, I placed several slices of Earl Grey Roast Pork. On the other side, I spread some slices of Bosc pear and the impromptu cabbage slaw.

This was delicious, there’s the savory pork, the sweet pear and the vibrant, tangy slaw all coming together. I will definitely make this again. 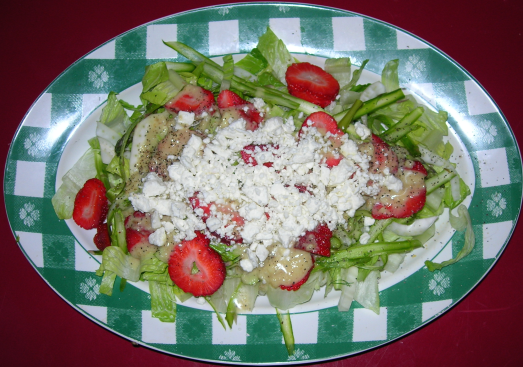 After making the Roasted Grape Vinaigrette, I was hungry for a salad. I tore up some Romaine lettuce leaves to form the base, shaved off a couple slices from a fennel bulb and chopped them up, shaved three asparagus spars with a peeler, sliced three strawberries (they were twice the length of regular strawberry) and layered it all on the lettuce. I added the Roasted Grape Vinaigrette, assed some salt and pepper and sprinkled with feta cheese (a bit more than usual because the package was so close to empty) and that was it.

The flavors are a good blend. The sweet strawberries are a delicious counter to the tangy feta, the fennel and asparagus complement each other and Romaine is always a good foundation. The vinaigrette is a perfect, sweet and tangy dressing.