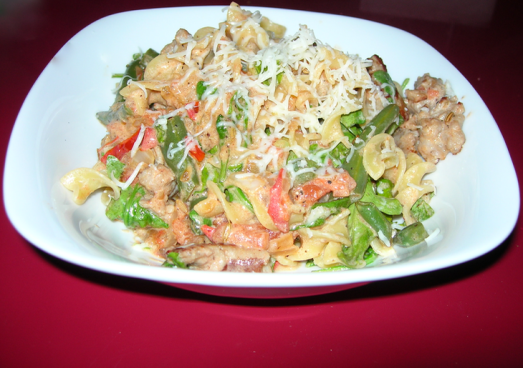 I heated a cast iron pan on medium low (3 of 10) and on another burner put a pot of salted water on to boil.

In the cast iron pan, I tossed in a pinch of fennel seeds, about 1/4 tsp or so and let them heat while I removed the casings from 3 breakfast sausage links. I added the sausage and, using a fork, smashed it up to little bits of pork. There was not much fat, but it was enough to cook this without any additional oil. I added 2 TBSP of diced yellow onion. Then I diced a small Roma tomato and added it. I let them cook.

I added 3 handfuls or 3/4 cup of dried egg noodles. I ended up with about 1 cup of noodles when it was done cooking.

I added 1/4 cup of sour cream to the cast iron pan, strained the pasta and stirred it into the sauce and then added a big handful, a cup or more, of fresh rocket. I stirred and removed from the heat so it just warmed but did not cook the rocket.

Grate just a bit of asiago or parmesan cheese on top.

This made one serving. It has a peppery flavor from the rocket, a bit of heat from the sausage and this wonder deep flavor coming from the fennel. The sour cream gave it a nice creaminess and added some fat that it really needed to soften the acidity of the tomatoes and the peppery rocket.

I seldom roast chicken because I love soup and hate losing all the broth I can get from boiling a chicken for soup. However, I got this brainstorm the other day, wondering what would happen if I saved all the bones from my roast chicken and boiled them for broth. I tried it and it worked. Now, the broth was not a rich in chicken flavor as one that has had the skin and meat cooking away with the bones, but it was flavorful and delicious anyway.

To start, I sautéd an onion in 1/2 tbsp of olive oil. I added 2 cloves of garlic, salt, pepper and 1 tsp of dry mustard. Then I tossed in the carcass and all the remains from the roast chicken. I added water enough to cover the bones, put a lid on and brought it to a simmer. I added a bay leaf and let it simmer away for about an hour. I strained the broth to be sure I got all the bits of bone and cartilage out and tossed them away. Now I was left with a tasty broth. I added 2 carrots and 8 mushrooms, in 1/2 pieces or so, and let them cook until tender. I then added 1 cup of frozen green beans and 1 cup of dry packaged egg noodles. The noodles took about 10 minutes to cook until tender and by then everything was done. I added some salt and pepper and 1/2 tsp of mustard to boost the flavor a bit.

This is a 10 minute dish that is fresh, flavorful and delicious.

Put some water in a kettle to boil and add a dash of salt. In a skillet, heat 2 TBSP of olive oil at medium low (3 on a 10 point electric range). Mince two cloves of garlic and toss in to cook. Clean and slice 4 mushrooms and let cook. By now the water should be boiling, add 1/2 cup of dry egg noodles.

Take one stalk of broccoli and cut off the florets. You can peel the stalk and chop it in smaller pieces or save it for pickled stems. I reserved the stem to pickle later and only used the florets. Put them in a small bowl and heat in the microwave for 3 minutes.

The mushrooms and onions should be nice and tender. Cut a lemon in half and squeeze all the juice into the skillet mixing it with the olive oil and mushrooms. Taste and add salt and pepper to taste. Toss in the florets. The noodles should be done, drain and stir them in, tossing lightly to spread the lemony, garlicky olive oil through the dish.

This makes one complete meal or two servings as a side dish. The lemony garlic flavor is fresh and bright and gives this a lively zest.

I took three slices from the beef roast I made the other night and cut into chunks – making about 1 cup of 1/2 square chunks. I tossed them into a quart saucepan on medium heat. There’s enough fat in the beef that I did not bother adding any cooking oil. I added 1 TBSP of diced onions and heated until softened. Adding 1/2 cup of water and 1 cup of milk (made from nonfat dry milk) and 1 cup of dry egg noodles I brought to a boil. I added a handful of frozen green beans, 4 sliced up fresh mushrooms and 1 TBSP of  flour mixed 2 TBSP water and salt, pepper and oregano. I stir it in slowly and let is simmer. I don’t add sour cream because I don’t buy sour cream. I don’t use it quickly enough and it just spoils. I put a lid on it and let is simmer for about 15 minutes.

I served with thinly sliced radish on romaine with some raspberry vinaigrette.