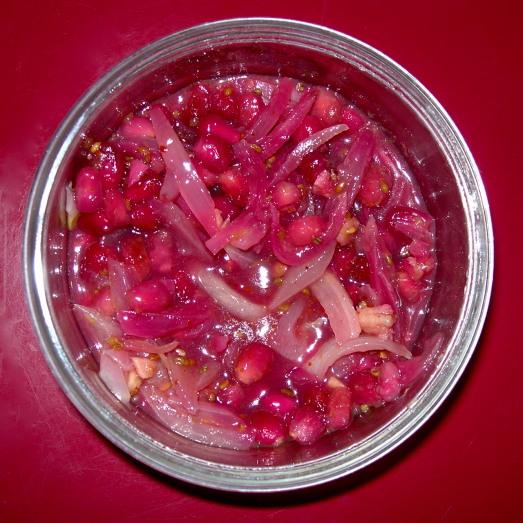 It’s pretty easy to clean a pomegranate, just cut it in half and pull the edges than knock it on the outside with a spoon and the seeds fall out. However, at Harvest Share this week, I got two packages of already cleaned pomegranate seeds. Sadly, however, they were already past their sweet spot and had turned sour and vinegary. I know some people would toss it out, since it was beginning to change, but pomegranate is acidic and just being past its prime does not make it a home for bacteria, just very sour flavor. I knew I could fix it and enjoy this fruit I really love. I just had to figure out how. Since it was already very vinegary, it made sense to use it as a sort of vinegar and make a salad dressing or a relish. But first I had to figure out what could balance the sourness. I pulled out aromatic spices like nutmeg, cardamom, and anise and tried a few grains with one pomegranate seed to see what I liked best. Both the nutmeg and the cardamon tried, but they added heat as well as balance and I wanted to make it more mellow, so I chose anise.

I put 2 tbsp of olive oil in a sauce pan with ½ tsp of anise seed and heated to release the oils and flavor the oil. I then added 2 tsp of minced fresh ginger. I sliced ½ of a yellow onion into slivers and added to the olive oil, cooking until tender. I then added the 8 oz package of pomegranate seeds and cooked just until it started to break down. I added 4 TBSP of  rice vinegar and salt and pepper to taste. This made enough dressing for 4 large salads. It would also work well as a relish on the side where you might use cranberries, with pork, turkey, or sausage.