END_OF_DOCUMENT_TOKEN_TO_BE_REPLACED

I heated my cast iron skillet to medium, adding

The spices will bloom in the hot oil. I added

While they cooked. I cut up a piece of boneless pork “carnitas” that was on sale for $1.58/pound at WinCo. I cut up about

I let the pork cook until done. When it was fully cooked, I added 2 handfuls of rocket (arugula) and stirred in with

Mixing everything together, as soon as the rocket was tender, I served it up in a bowl. It made a tangy and spicy delicious dinner.

This was a delicious breakfast scramble and so easy.

I heated my cast iron skillet to medium, melting about 1 TBSP of butter, tilting the pan to make sure it was all coated with butter. I had a bag of those mini bell peppers in all colors.  I chopped up about 2 TBSP of red onion, added it to the pan and let it cook. Then I chopped up 2 TBSP of red and yellow peppers and added it to the onions. I cooked until tender. I lowered the heat to low, so I could slow scramble.

While they were cooking, I cracked 3 eggs, added 1 TBSP of water, and blended with a fork. I also grabbed about 1/2 of fresh rocket (arugula) and chopped it up.

This was a delicious and hearty breakfast. I like the peppery zest of the rocket. 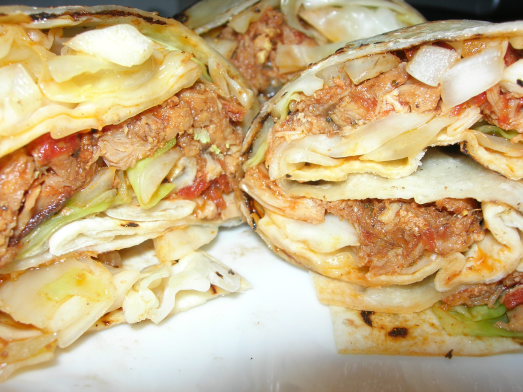 This is from last month and I am slow to blog it. It was too hot to bake anything, but I had a 3 pound pork shoulder roast to cook. I decided to make pulled pork on the stove top.

I don’t have a Dutch oven, so I used my soup stock pot. I put it on medium heat with 2 TBSP of olive oil. I added the roast and browned it on all sides before removing for a few minutes. I wanted it to be browned but also wanted to develop flavors before adding the meat and did not want to use two pans.

I chopped up a yellow onion, added it to the oil, with some salt and pepper and sautéed until tender. I tossed in 4 cloves of garlic and about 4 TBSP of Jamaica Jerk seasoning. Yes, that much! I then added 2 cans of diced tomatoes and 2 cups of vegetable broth. I heated everything, stirring and then put the pork back in and let it simmer for a few hours, checking repeatedly until it was falling apart and tender. This was just amazing! So flavorful and not at all too spicy.  This makes a lot of pulled pork that you can use for all sorts of delicious things.

I made a simple slaw of sliced cabbage, diced onions, salt, pepper and oil and rice vinegar.

I grilled two flour tortillas using the electric coils on my stove. You have to keep a close eye, do not walk away and have the exhaust fan going on high to avoid setting off your smoke alarm.

After grilling the tortillas, I put half the slaw on each tortillas, and then put a half cup of pulled pork on each, rolling up and cutting in half. It was delicious, meaty and fresh and crunchy with the cabbage. 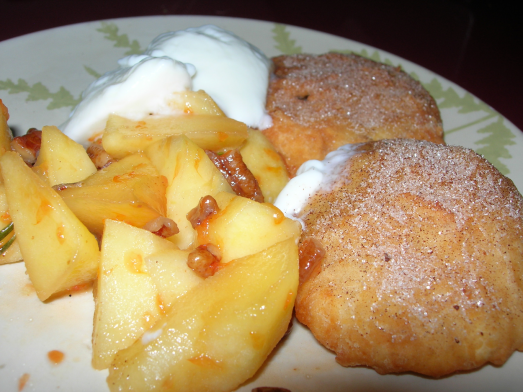 I made these last month when it was too hot to turn on the oven, but wanted to make an apple dessert. I decided to make some fry bread with apples and yogurt.

To make the fry bread. Heat vegetable oil in a deep pan. Use plenty of oil (1 or 2 cups), you can strain it through a cheese cloth and use it again.

Mix together and form into four rounds. Drop into the oil, one or two at a time, depending on the size of your pan. You want plenty of space. When one side is done, flip it over and fry on the other side. Remove and rest on paper towels to drain, sprinkle with cinnamon and sugar.

So, these are slightly savory apples. I put 1/2 TBSP of butter in a pan with some sliced red onions and a few rosemary leaves. I added two apples, peeled and sectioned, and cooked until tender but not mushy, adding a TBSP of sugar at the end to sweeten the onions a little bit more.

I served  half the apples with two fry bread and a spoonful of yogurt. This made two servings.