It’s fun to experiment and this was a good one. I had some ground turkey that the store had overground, it was closer to meal than meat so the only thing it was suited for is meat balls or cutlets. So, that’s what I went for.

Prepare the vegetables in advance.

In a small pan, melt 1 tsp of butter and sauté on medium heat until tender the following veggies. Add salt and pepper.

There won’t be any butter to drain. Just toss into a bowl with the following ingredients and form into small cutlets. The flax seed doesn’t add any flavor or anything. They are just a good source of antioxidants and other health benefits. Cooking releases their optimum benefits. 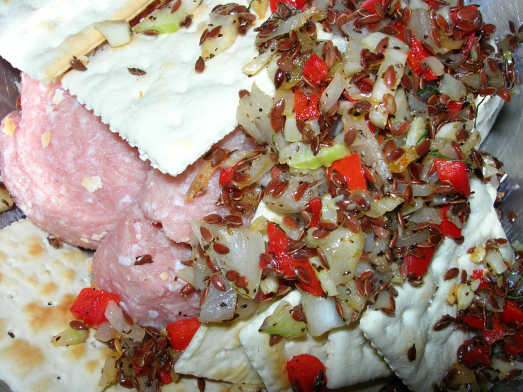 Heat a skillet to medium heat with just enough olive oil to lightly coat the bottom. Add the cutlets to the pan and cook, turning when browned on one side. Cook until browned on both sides and then put a lid on it, setting it aside on a low heat burner while you toast the bun.

Flip turkey cutlets after one side has browned, brown the other and then cook on low with a lid on it to cook the meat thoroughly.

1 baguette sandwich bun, sliced and toasted on a griddle.

For the mushroom sauce, use the small pan you cooked the veggies in. Melt 1 TBSP of butter. Add garlic cloves, then the mushrooms, paprika, salt and pepper. Sauté until tender and add white wine, cook it down and add sour cream.

Meanwhile, chop some fresh cilantro to top the sandwich. This makes two sandwiches.  There is plenty of sauce from the mushrooms that you don’t need butter or mayonnaise on the bread.

Oops, part of a cutlet broke off Add mushrooms and cilantro on one side, cutlets on the other. No mayo or butter needed because the mushroom sauce has plenty of moisture.The sandwich is so delicious, that little bit of fennel is everything.