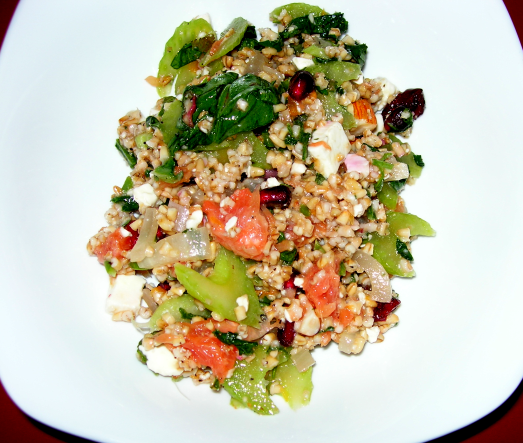 I made some bulgur while I made my morning tea, adding two cups of boiling water to 1 cup of bulgur and leaving it io absorb the liquid. It was tender and ready for salad later in the day when I was making lunch.

I started by cutting the flesh from a grapefruit. To supreme a grapefruit, cut away the peel and then slice the wedges. I cut this on cutting board to capture all the grapefruit juice that gets squeezed out in the process no matter how hard you try to avoid it. I cut the wedges to avoid any skin and pith and then tossed the juice on the cutting board and the skin and grapefruit left on the skin when cutting wedges into a sauce pan to flavor a vinaigrette. I added about 3 TBSP of chopped onions and cooked them with a bit of olive oil and the grapefruit remnants. I added about 2 tsp of sugar and some white wine vinegar. The vinaigrette was tart and sweet and delicious. I removed the grapefruit bits and left the onions.

I added the grapefruit segments from the grapefruit plus thinly sliced pieces from two stalks of celery, about 1/4 cup of pomegranate, 2 cups of chopped spinach, 1 cup of chopped cilantro, 6 toasted and chopped almonds and 1/4 cup of feta. I then added the bulgur and the vinaigrette and let the flavors marry for about an hour before serving.

The bulgur have it a hearty foundation and the grapefruit and pomegranate added a nice light sourness. The vinaigrette was slightly sweet. The salad was a rich combination of flavors. The next time I make it, though, I might try added some dried cherries, too. Makes 4 servings.