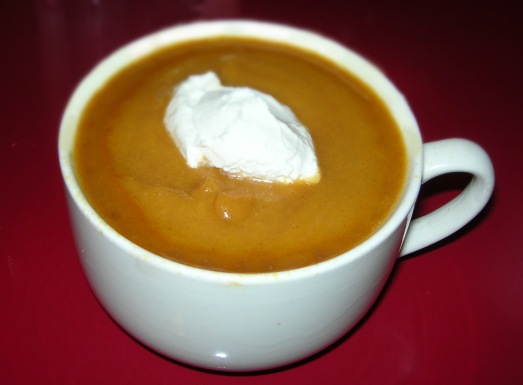 Winco had some impossibly low-priced linguiça that I picked up a few weeks ago and put in the freezer. I thawed it out for a soup, deciding to try it with a couple rutabagas. I was a bit leery because it was so incredibly cheap ($2.67 for 1 pound) but hoped for the best. Let’s just say that I will be buying it again. It was delicious and made a fabulous soup.

Okay, I started with 1 TBSP of olive oil in my soup pot and heated it on a low medium. I added 1 tsp of cumin powder and 1 tsp of cinnamon. While it heated, I chopped1 medium yellow onion, salt and pepper, and tossed it in, letting it sauté until tender. While it was cooking, I pelled a 1 inch piece of fresh ginger and shredded it. I then added 2 cloves of minced garlic and sautéed everything together. The aroma was heady. I added the linguiça and let it cook a bit, so it was browned before I added 1 quart of water and  turned the heat up to a simmer.

Now I peeled 2 carrots and 2 rutabaga and 1 apple and chopped them up into small pieces. I did not worry about regularity as I planned to puree the soup, but it would cook faster with smaller pieces. I added them all to the soup, tossed in some salt and pepper and let it cook until tender.

I removed the linguiça and set it aside. I let the soup cool down, coming back an hour later to puree the soup. An immersion blender works best, but I don’t have one, so I used my Magic Bullet. After it was pureed, I added back the linguiça that I had chopped into 1/2 inch long pieces. I reheated it using the microwave on low and added a dollop of sour cream for that hot-cold,  spicy-sweet and sour contrast.

I made a similar soup several times, but this has a different flavor profile with the cinnamon and the linguiça and is, I think, a better version.