I grabbed some asparagus (8 stalks) and trimmed the ends off before putting them in my paella pan to roast, sprinkling them with a bit of olive oil and kosher salt and sticking them in a 450 degree oven. I put some olive oil in a skillet, chopped 1/4 onion and 2 cloves of garlic and tossed them in the oil to soften. I sliced up two crimini mushrooms and 1 sweet red pepper. I added 4 ounces of ground turkey to the onions and garlic and let it cook about two minutes before added the red pepper and mushrooms. I put the lid on and poured some water in a pan and put it on high to bring to a boil. When it began to boil, I added a cup of tortellini. While it boiled, I removed the asparagus from the oven and plated it and tossed some salt and pepper on the ground turkey mixture. I added a tablespoon of dijon mustard and the juice of half a lemon. By now the pasta was done, I strained it and put it on the plate and then added the meat mixture. 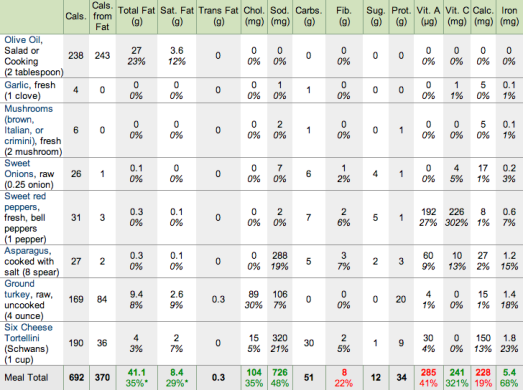